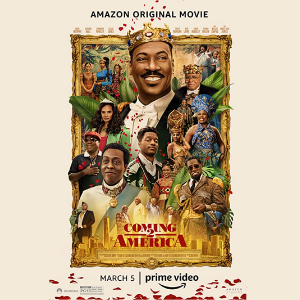 BY: Buda The Comedian

I was 14 years old when one of the funniest movies was ever released into theaters. Coming to America is just one of those movies that stands the test of time. I don’t know why but it just does. I feel like everything Eddie Murphy did back then still holds up. Unlike The Golden Child, Beverly Hills Cop, or 48 Hrs, this was the first time I saw Eddie Murphy not only play other characters but other races. He plays the old white Jewish guy in the barbershop. I didn’t even realize that until I was 20. What talent?! I will admit the concept of the movie is kind of old school and has been done a million times. Eddie Murphy plays a prince who inherits an entire kingdom including a house, money, servants, and even a wife. But Prince Jaffe wants to find true love so he packs up and heads to America. He winds up finding true love and the movie has a happy ending. I give Coming to America a 9/10. I took a point away because Arsenio hall is in the movie.

Today, Amazon Prime will be streaming the sequel Coming 2 America! That’s right, free to prime members! I’m really afraid of the sequel because I want Eddie Murphy to succeed. I miss him. I miss his comedy. I miss hearing his voice. I don’t know how it’s gonna go. Comedy sequels always leave a nasty taste in your mouth. They never taste like the first one. It definitely won’t taste as good, especially after the original was so amazing and rated R and now you want to do a sequel 33 years later and it’s PG-13? I don’t know guys what do you think? Is anyone gonna be happy? I don’t know, I’m keeping an open mind and I have low expectations so maybe it will be amazing. Tonight, I am having all the ACJokes guys over my place and we are going to have a watch party. What are your thoughts?

Is Your Family Funny?
Scroll to top
OUR TROPICANA LOCATION IS OPEN!!!